327 people read this April fool joke and 65 people clicked through to the download page! Hope you enjoyed it! Below is the text. 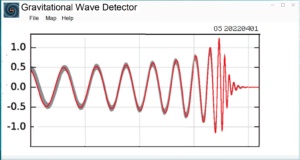 Gravitational waves are disturbances or ripples in the curvature of space-time caused by massive objects moving with extreme accelerations. In outer space that means objects like neutron stars or black holes orbiting around each other at ever-increasing rates, or stars that blow themselves up. They propagate as waves outward from their source at the speed of light. Blackhole binaries emit gravitational waves while they rotate around each other faster and faster the moments before they merge when. The first direct detection of gravitational waves, GW150914, came from the merger of two black holes. So far very large expensive facilities are required to detect gravitational waves. The first detectors were called LIGO gravitational wave detectors and are located in Livingston, Louisiana, and in Hanford, Washington. The research was awarded the 2017 Nobel Prize in Physics.

At Gislen Software we support advanced research and we have over the last few years collaborated with Dr Kumar Luof Lirpa from Madras Institute of Cerritulus Sciences who is an Indian expert in gravitational waves. Dr Lirpa and our software engineer have developed a new inexpensive method of detecting gravitational waves. Since most laptops have motion detectors to protect their hard disks, we realised that by using a lot of laptops spread out across the world, we could get the same result as in the very expensive equipment used so far. Thanks to the number of small detectors we have been able to get the same quality of detection of changes in space-time. The open-source software installed in a high number of laptops which all reports to an AI-based cloud solution we just managed to detect the first merger between two black holes today – We have called the event GS 220401.

To improve the quality of the detection further, we need more volunteers to download and install the open-source software on their laptops. It is a small software that will run in the background and not disturb your work. When the mesh of detectors jointly detects a gravitational wave, you will get an alert and it will show a graph on the screen showing the data.